We are excited to announce version 2.3.0 of Bryntum Grid. This release is jam-packed with both big and small improvements. For full details please see the change log.

While Grid is perfectly capable of handling really large datasets locally, it is not always practical to do so. With this release we are introducing paging support both in our Store and in the UI using a new PagingToolbar. Supporting paging also means that we now support remote sorting, grouping and filtering. Try it out in one of the new paging demos: 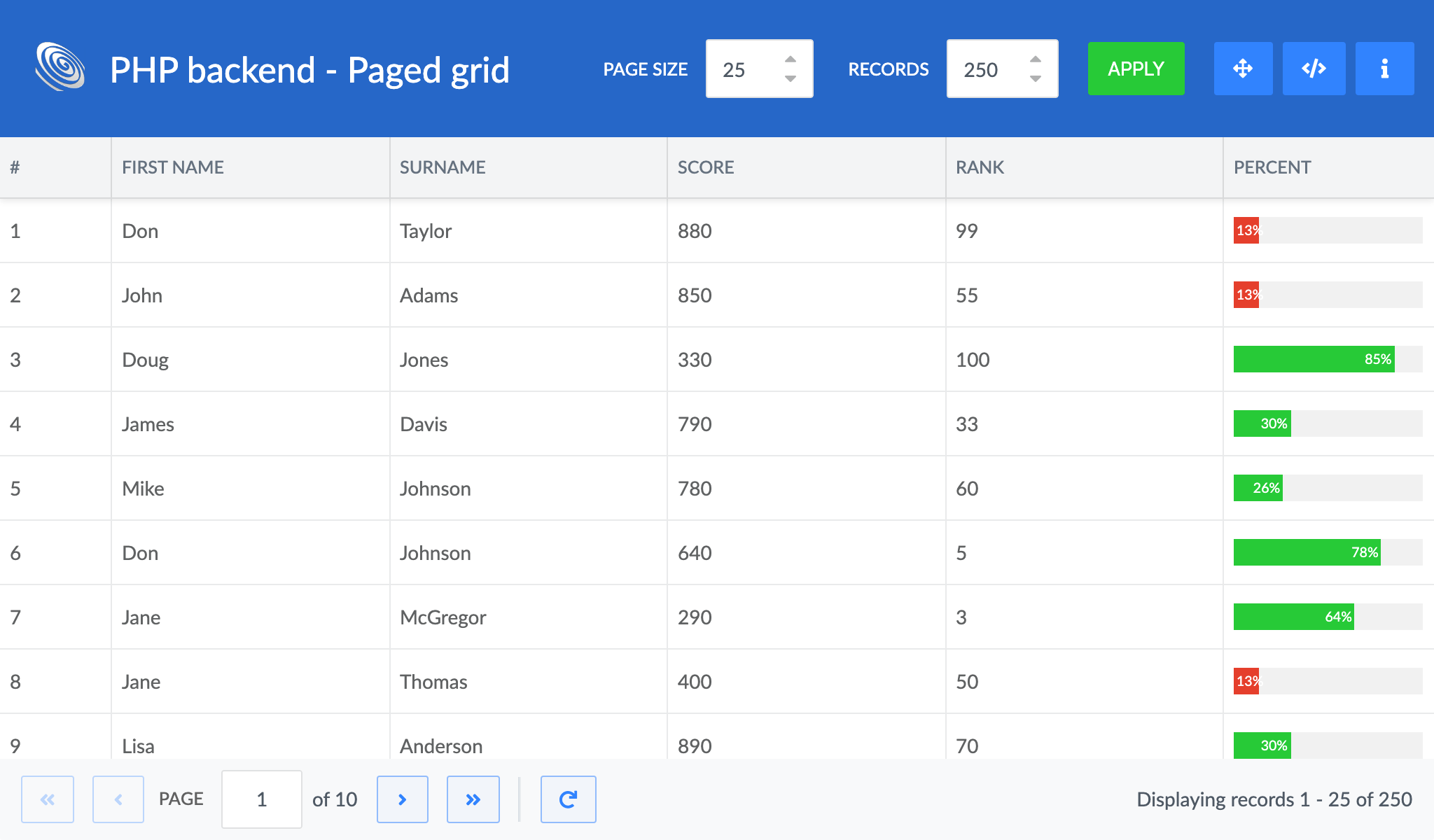 Experimental: JSX in renders and as cell editors

Take a look at the updated React demos to see how it can be used: 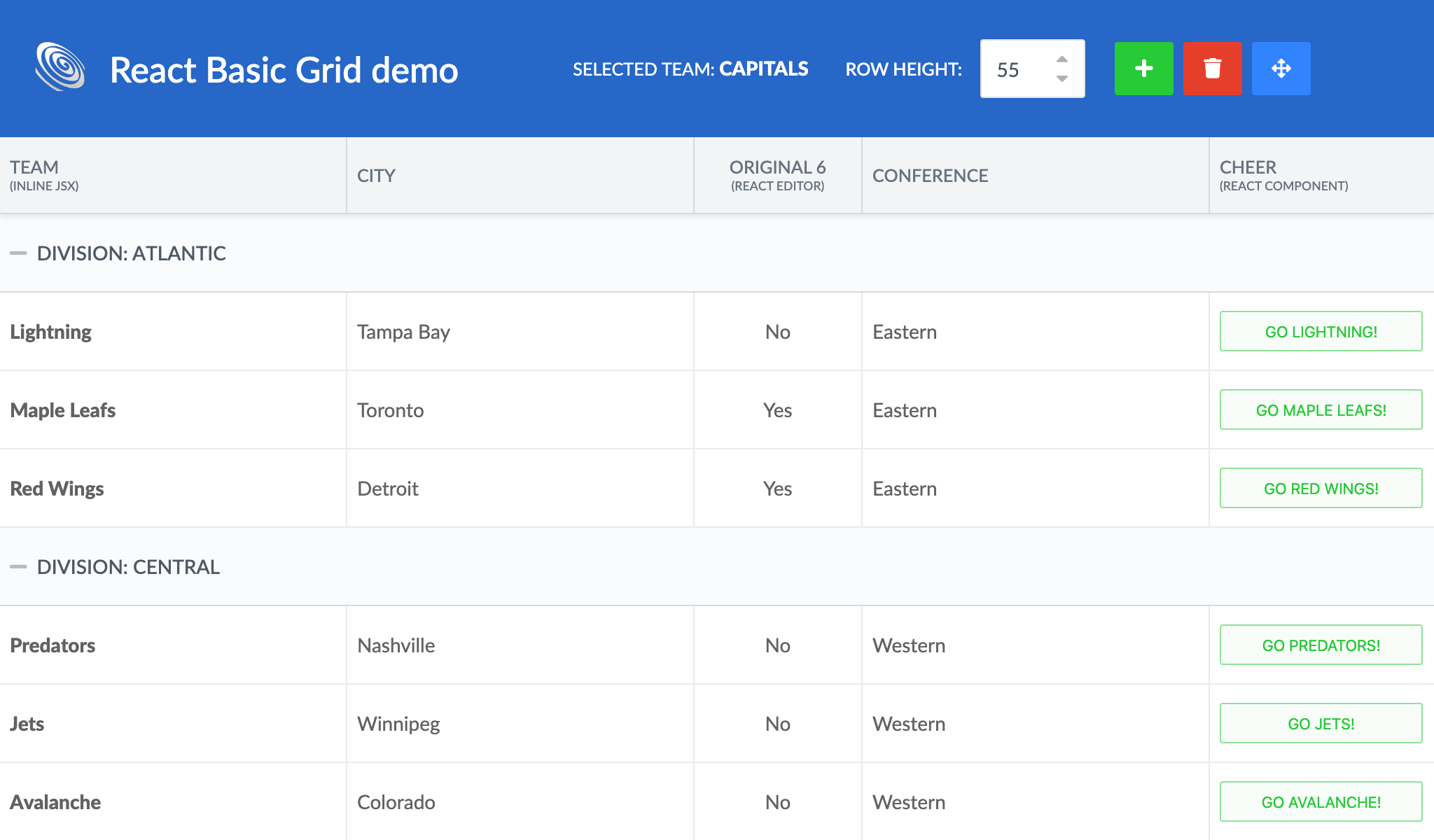 The Group features `groupRenderer` can now populate all cells in a group header, as opposed to previously when it could only affect the first column. This opens up for greater flexibility as how to render group headers, try out the updated `grouping` demo to see it in action: 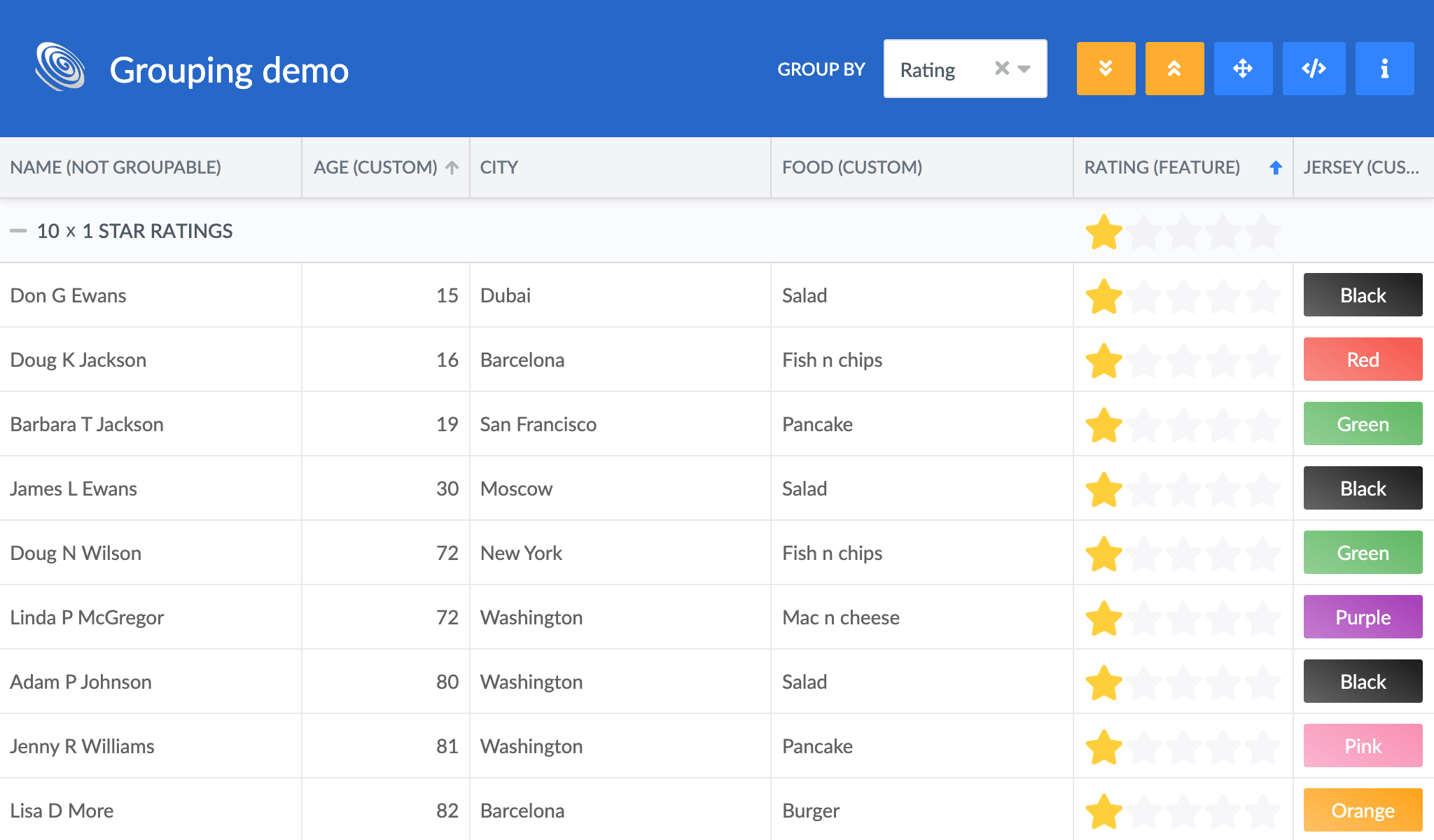 To simplify making custom builds from our sources there is now a new demo called “custom-build”. It uses WebPack to build a custom app + Grid bundle with smaller footprint than what you get with our full bundles. The demo uses a new base class for `Grid`, called `GridBase`. `GridBase` is basically the `Grid` without any default features imported, making the built result a bit smaller (approximately 30% if no features are used).

Our demos combining Grid and Scheduler or multiple Schedulers on the same page are very popular. A common request related to these demos have been how to make the different components resizable. To solve this we have added a basic Splitter widget. When added between two widgets (or other elements) it can be used to resize them. 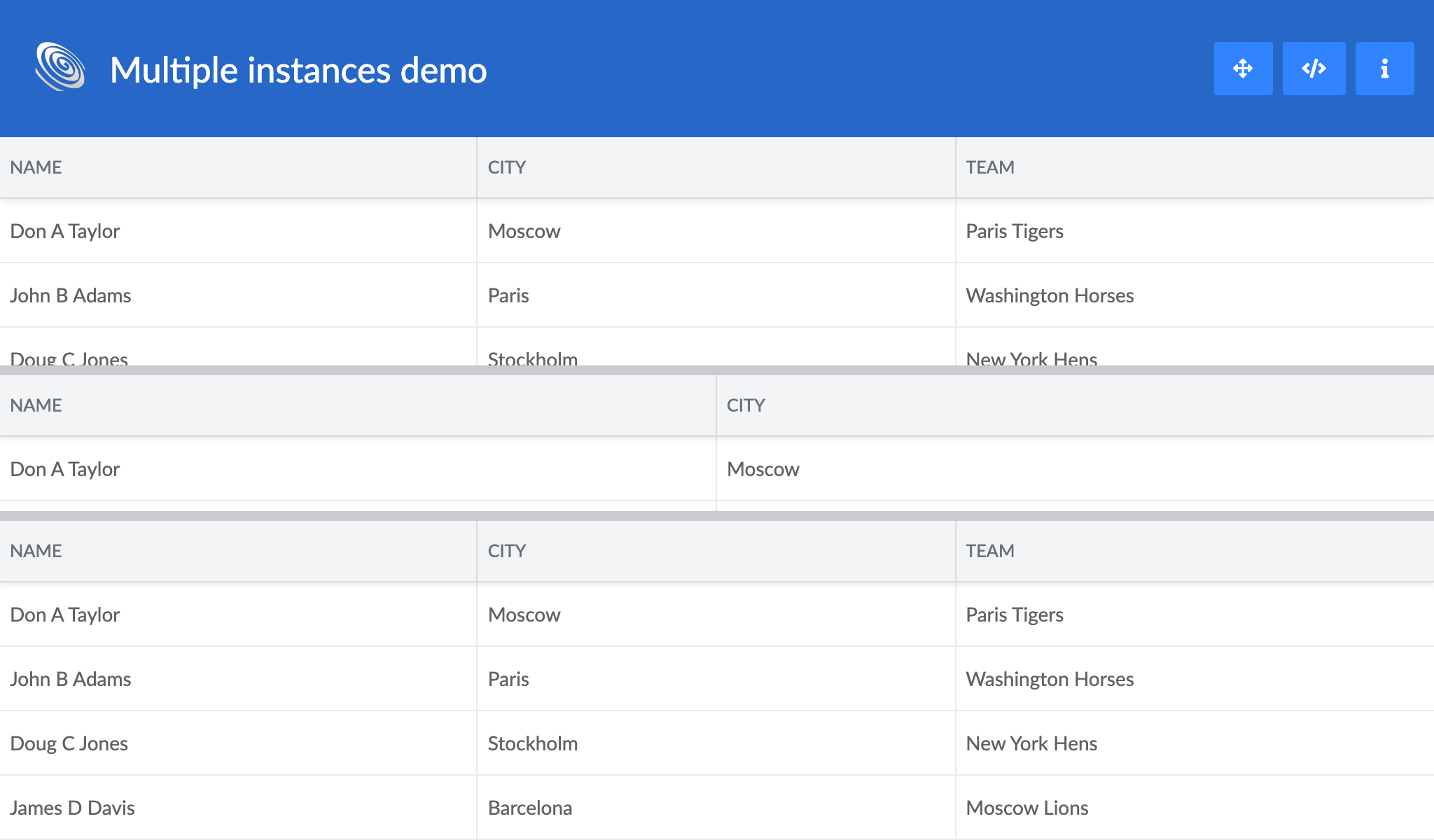 Container and its subclasses now support:

All features except the Tree feature can now be enabled or disabled at runtime (assuming the feature was imported).

In addition to the paging support introduced above, Store now also has a new config to enable syncing the difference between a new dataset and a previously loaded one. By configuring a Store with `syncDataOnLoad: true` the new dataset will be compared to the old and only the changes will be applied (added, removed and modified records).

Model now allows adding and removing fields on the fly, using `Model.addField()` and `Model.removeField()`. This can be combined with configuring Grids ColumnStore with
`autoAddField: true` to automatically add fields for any new column. Try it out in the updated `columns` demo: 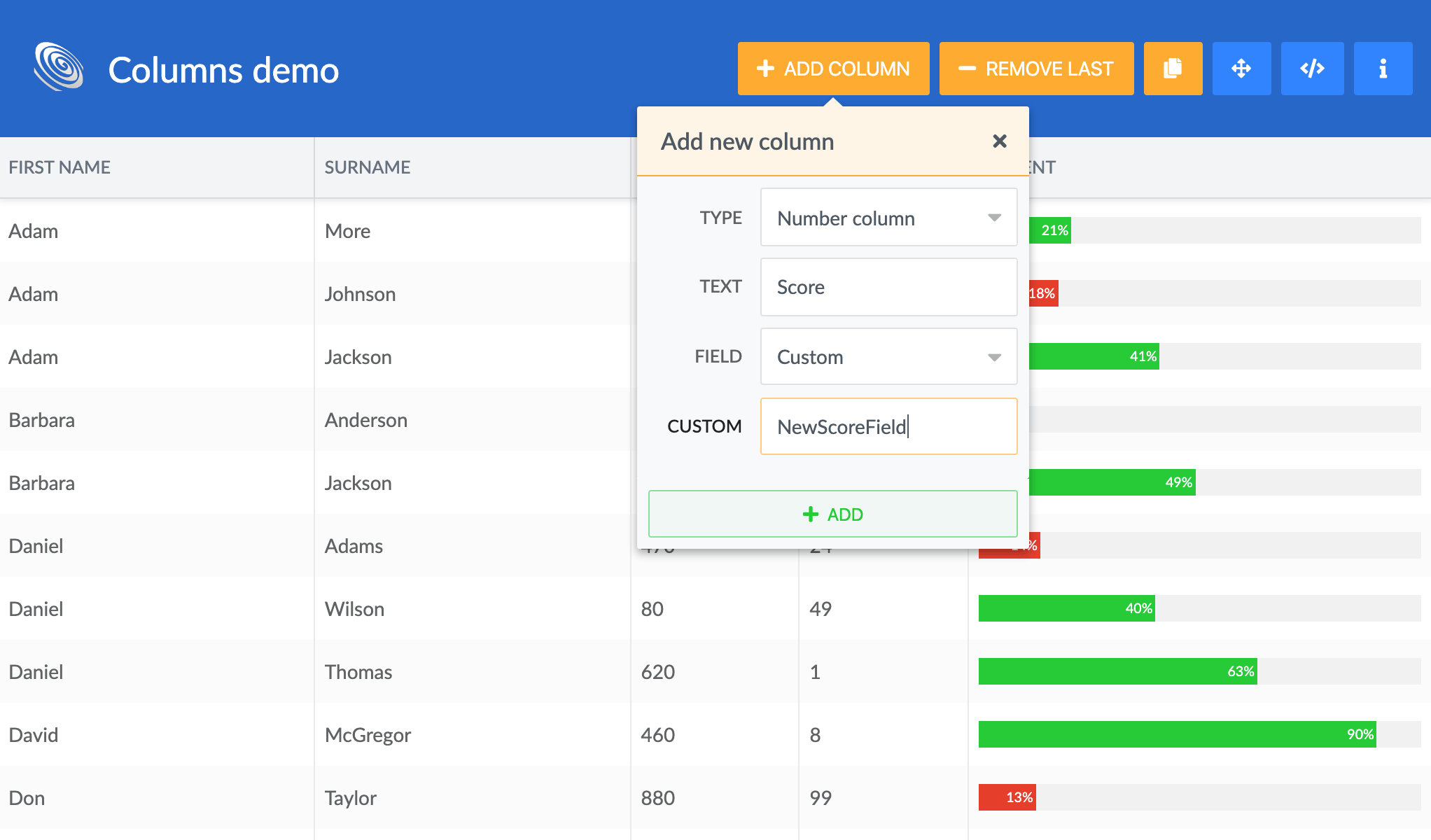 We hope you will enjoy all the new goodies in this release. For full details please see the change log.