We are thrilled to report that the new 5.2 release of our Bryntum web component suite is out. Among the highlights in this release are: task/event splitting, calendar responsiveness, task & event non-working-time visualization and much more.

Gantt and Scheduler Pro now support task/event splitting, turning a single task into connected segments that can be dragged and resized individually. Check it out for Gantt in the new split-tasks demo:

And in the new split-events demo in Scheduler Pro:

Calendar now uses the Responsive mixin (which has been refactored) introduced with TaskBoard to better fit smaller screen sizes by hiding / replacing parts of the UI. It is enabled automatically, try it out in any demo. Here are two screenshots from the basic demo, on two different screen sizes: 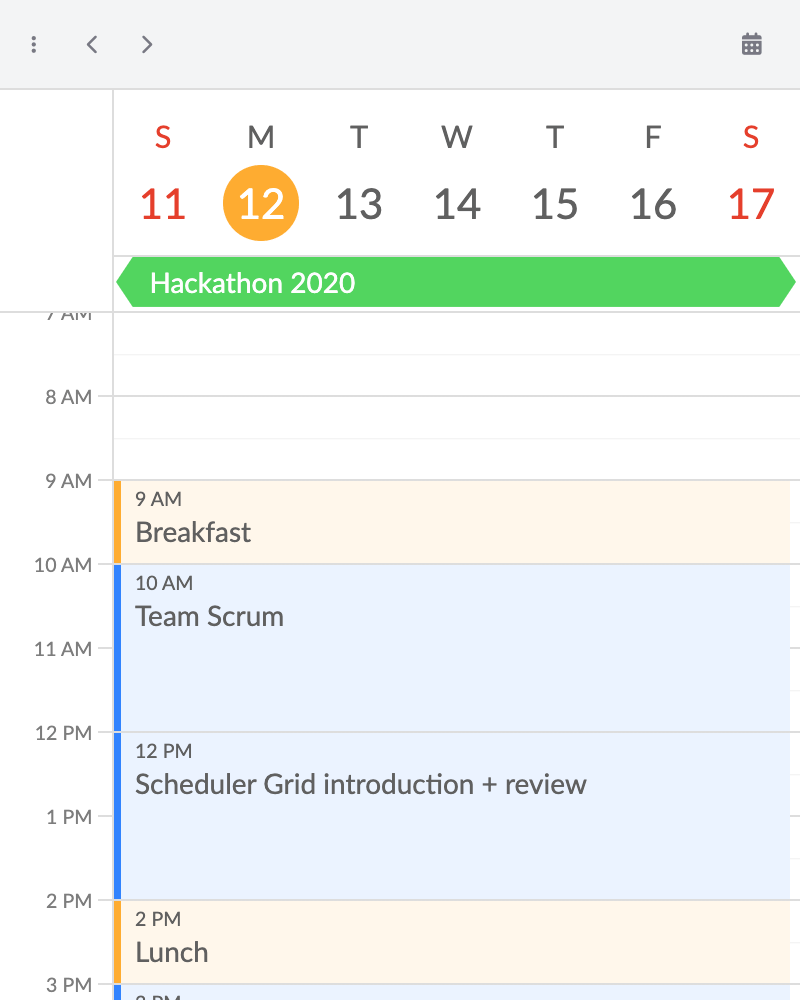 The PDF export feature has a new “direct rendering” mode that is now enabled by default. It no longer needs to scroll through the dataset, which improves the UX and greatly reduces the time it takes to create the content that the backend then processes to create the PDF.

In this release we have improved both by making it possible to specify that a function or property that accepts a configuration object for a specific class now instead of a generic object can accept a typed object.

For example the cellEditor config of a Grid Column, which allows you to configure the floating Editor used to edit the cell. Previously it would accept an untyped object, but now it instead accepts an EditorConfig (which in typings translate to Partial<EditorConfig>).

Gantt now supports scaling tasks to fill whole ticks (the bottommost time axis unit, “cells”), using the fillTicks config (which was ported from Scheduler). An improvement to it is that it now also fits the non-working-time ranges, for a more cohesive look. Try it in the new “fill-ticks” demo:

Gantt has a new TaskNonWorkingTime feature that visualizes non-working-time from the task’s calendar. Check it out in the new “calendars” demo:

There is a new TimeSelection feature in Scheduler that lets users select a time span in the time axis header. The purpose of the selection is up to the application, in the accompanying “time-selection” demo it can be used to select intersecting events or filter out unavailable resources:

Grouped columns in grid can now be collapsed by the user, when configured with collapsible: true. There are two modes to pick from when configuring it, either collapsing hides all but the first column in the group, or it toggles the visibility of the columns in the group so that previously hidden columns are shown and vice versa. Comes with new demos in Grid, Scheduler and Gantt, all named “collapsible-columns”. The Grid demo:

The TreeGroup feature introduced in version 5.0.0 has been refactored to make it more useful. It no longer transforms the original store, but instead creates links to the original records in a “display store” and transforms that.

For Gantt this has the major advantage that the original tree structure that is used in scheduling is left intact, and tasks in the grouped view can still be edited and will adhere to the rules of the original structure. In the previous implementation all tasks had to be flagged as manually scheduled, basically making it a read-only view.

Another advantage is that the new approach also works in Scheduler, and as a bonus it is more performant than the old approach. Scheduler ships with a new “tree-grouping” demo:

It is now possible to enable mouse events for resource time ranges, by configuring the feature with enableMouseEvents : true. When doing so, it will trigger events like click, mouseover etc. prefixed with “resourceTimeRange”, resourceTimeRangeClick for example. The config is used in a new “booking” application demo in Scheduler:

Calendar has a new emptyCellRenderer that lets you inject custom content into empty days in the month view. Used in the new “show-booking” demo:

For full details about this release, please see the change logs, What’s New guides and upgrade guides of each product:

Version 5.2 adds many new features and demos, almost exclusively based on the feedback received from our customers and community. We hope you will enjoy this release and please keep your feedback coming. Is there a specific feature you would like us to add next?